Reimbursements negotiated with commercial payers are often a percentage of Medicare reimbursement rates, e.g. 200%. If you have negotiated reimbursements with a commercial payer you can enter those values into the BSBT to see the bundled payment based on your patient population. You can also calculate what the bundled payment would look like using various percentages. Ensure that View Percentages is checked above the price columns. 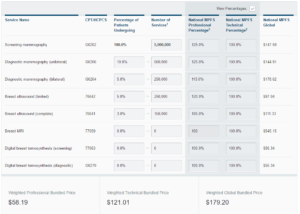 We have entered hypothetical locality-adjusted reimbursements in the table below to illustrate this BSBT function. 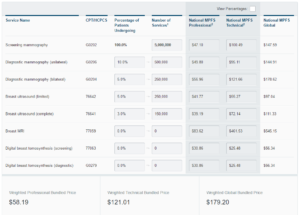